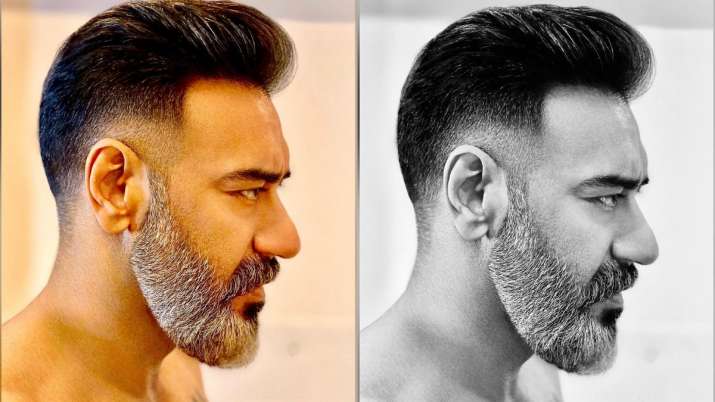 Ajay Devgn has time and again left audiences impressed with his on-screen performances. Not only this but fans are even impressed about his macho physique and fitness. A few days back, he grabbed the limelight for his never-seen-before avatar as he was seen sporting salt-and-pepper in his hair and beard. Yet again, the actor has managed to grab our attention and this time for his new haircut. His hairstylist made sure that his fans get to see his stylish look and shared the pictures on Instagram. Alongside the photos that Aalim Hakim posted, he wrote, “Deadly Devgn sports a Dapper look @ajaydevgn Did this new haircut & beard for our one & only @ajaydevgn @ajaydevgn @aalimhakim.”

As soon as they were shared, it caught the attention of not just his fans but also many actors like Anil Kapoor, Kartik Aaryan, Mahhi Vij, Maniesh Paul and Abhishek Bachchan who were surprised by his new look. Speaking about his cut, it was styled by celebrity hairstylist  Aalim Hakim and featured the 52-year-old superstar sporting a salt-and-pepper beard and slicked-back hair.

Have a look at the same here:

During the lockdown, whenever Devgn was spotted there was a slight mystery behind his face mask. Paparazzi often caught sight of a black and silver beard peeping mischievously from his mask. Some people even thought that it was just a lethargic, ‘I’m too lazy to shave’ exercise. However, now that the same beard has been trimmed and designed to give the actor a sharp and superb look, it’s evident what it was meant to lead up to. Buzz is around that for his current film and another acting assignment, deadly Devgn is likely to make slight changes to his facial beard and hair.

Just last week, few pictures of the ‘Singham’ actor from the birthday celebration of his bodyguard went viral on the internet. They were shared by Gautam himself alongside caption reading, “Celebrated my best day with Boss… Today whatever I am because of You boss..thanks boss for making My Birthday special.”

It is being said that Devgn’s salt-and-pepper look is a part of his character in Indra Kumar’s slice-of-life comedy Thank God which also features Sidharth Malhotra and Rakul Preet Singh.

Apart from this, Ajay will be seen in Abhishek Dudhaiya directorial ‘Bhuj: The Pride Of India. The war drama also features — Sonakshi Sinha, Sanjay Dutt and Nora Fatehi and is all set to release on Disney+ Hotstar on August 13.

Not only this but he will also be making his debut in web series through ‘Rudra,’ the remake of British series Luther, which will also star Esha Deol. Apart from that, he will feature in– Rohit Shetty’s Sooryavanshi, Sanjay Leela Bhansali’s Gangubai Kathiawadi, SS Rajamouli’s RRR and Amit Sharma’s Maidaan.