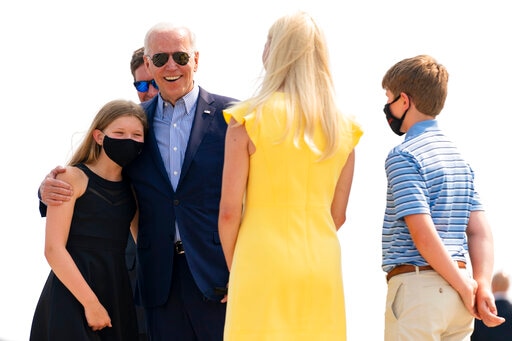 CINCINNATI, Ohio: President Joe Biden aimed to rev up support for his economic agenda with a visit to Cincinnati Wednesday, where he visited a union training center ahead of a CNN town hall.

The trip comes as the fate of his infrastructure proposal remains unclear after Senate Republicans rejected a $1 trillion blueprint i n a key test vote Wednesday. A bipartisan group of 22 senators said in a joint statement after the vote that they were close to coming to terms on a deal and requested a delay until Monday.

Biden expressed confidence in the outcome, telling reporters when asked if he would land a deal on infrastructure, Yes, we will.

While lawmakers wrangle over the details of that proposal on Capitol Hill, Biden was expected to use the town hall, in part, to talk about the broad strokes of his economic vision, making the case that his nearly $4 trillion package is needed to rebuild the middle class and sustain the economic growth the country has seen during the first six months of his presidency.

First, Biden toured the IBEW/NECA Electrical Training Center on the west side of Cincinnati. He got a chance to get up-close look at trainees working their way through five-year apprenticeships to learn the ins-and-outs of the sort of skilled, well-paid union jobs that he says will be in higher demand if his plan comes to fruition.

Theres a reason why union workers are the best trained, said Biden, as he met with apprentices going through five-year training programs.

Its his third trip to the state one he lost by about 8 points in 2020, but one that remains pivotal to the Democratic Partys political future and a key test of whether Bidens economic proposals have the broad appeal the White House hopes.

With presidential visits to the Ohio cities of Columbus, Cleveland and now Cincinnati, the White House is betting that Bidens policies are popular with independent voters and that the electorate will reward a president and party that are trying to solve their problems.

The state faces a heated Senate election next year with the retirement of Republican Rob Portman, who helped negotiate the infrastructure plan that now faces an uncertain future in the evenly split Senate.

The presidents visit took him near the dangerously outdated Brent Spence Bridge a chokepoint for trucks and emergency vehicles between Ohio and Kentucky that the past two presidents promised without success to replace. But Republicans are more focused on the increase in shootings and crime in Cincinnati, which they blame on Democrats, although there are a host of factors, including the coronavirus pandemic.

Biden is likely to take questions on many of those issues during his Wednesday night town hall on CNN, at Mount St. Joseph University, a private Catholic college in Delhi Township, a western suburb of Cincinnati.

Disclaimer: This post has been auto-published from an agency feed without any modifications to the text and has not been reviewed by an editor